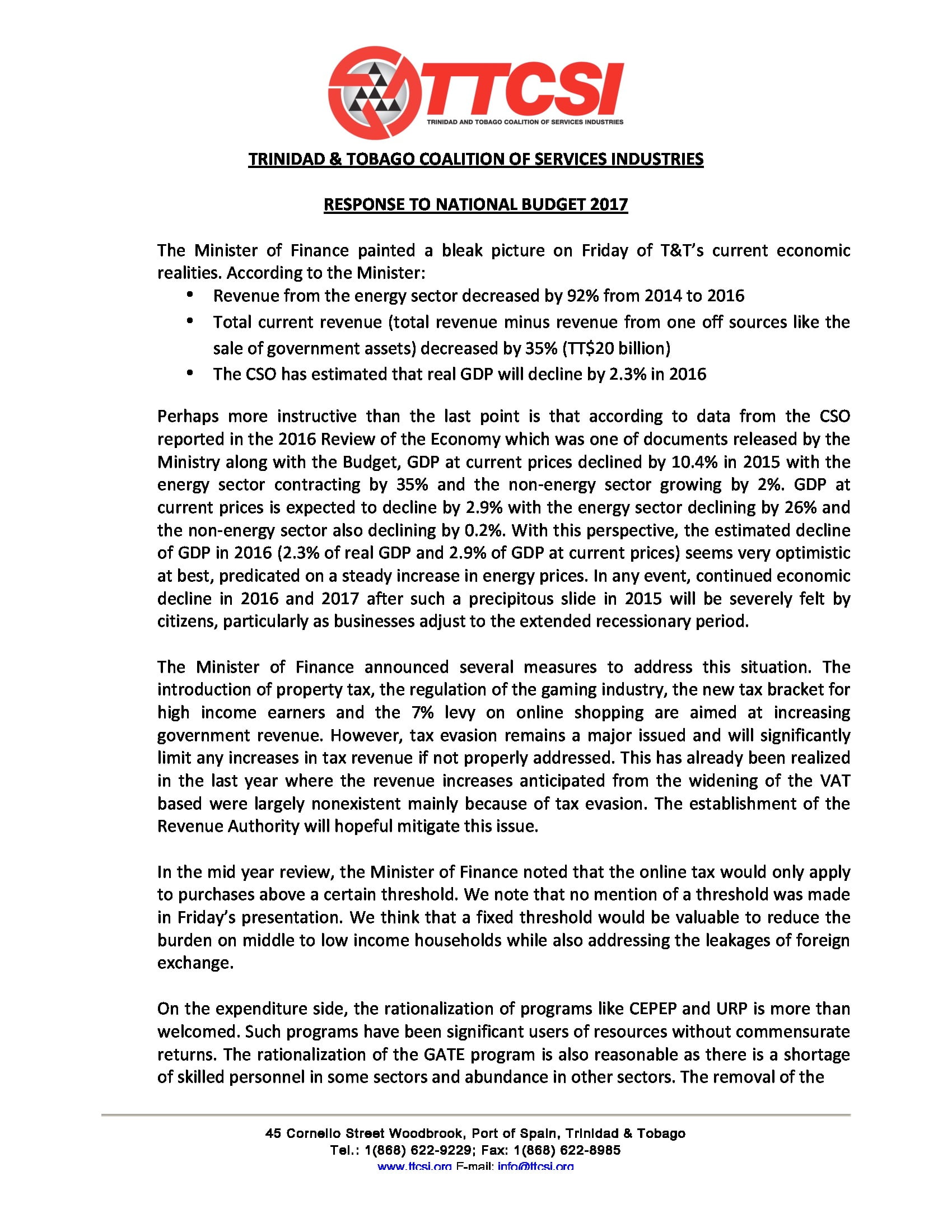 The Minister of Finance painted a bleak picture on Friday of T&T’s current economic realities. According to the Minister:

Perhaps more instructive than the last point is that according to data from the CSO reported in the 2016 Review of the Economy which was one of documents released by the Ministry along with the Budget, GDP at current prices declined by 10.4% in 2015 with the energy sector contracting by 35% and the non-energy sector growing by 2%. GDP at current prices is expected to decline by 2.9% with the energy sector declining by 26% and the non-energy sector also declining by 0.2%. With this perspective, the estimated decline of GDP in 2016 (2.3% of real GDP and 2.9% of GDP at current prices) seems very optimistic at best, predicated on a steady increase in energy prices. In any event, continued economic decline in 2016 and 2017 after such a precipitous slide in 2015 will be severely felt by citizens, particularly as businesses adjust to the extended recessionary period.

The Minister of Finance announced several measures to address this situation. The introduction of property tax, the regulation of the gaming industry, the new tax bracket for high income earners and the 7% levy on online shopping are aimed at increasing government revenue. However, tax evasion remains a major issued and will significantly limit any increases in tax revenue if not properly addressed. This has already been realized in the last year where the revenue increases anticipated from the widening of the VAT based were largely nonexistent mainly because of tax evasion. The establishment of the Revenue Authority will hopeful mitigate this issue.

In the mid year review, the Minister of Finance noted that the online tax would only apply to purchases above a certain threshold. We note that no mention of a threshold was made in Friday’s presentation. We think that a fixed threshold would be valuable to reduce the burden on middle to low income households while also addressing the leakages of foreign exchange.

On the expenditure side, the rationalization of programs like CEPEP and URP is more than welcomed. Such programs have been significant users of resources without commensurate returns. The rationalization of the GATE program is also reasonable as there is a shortage of skilled personnel in some sectors and abundance in other sectors. The removal of the fuel subsidy in this period of low petroleum prices is also welcomed. However, research should be done to analyze the impact this move would have on the competitiveness of our manufacturing and services sectors, with relevant measures being implemented to preserve the competitiveness of the sectors.

While brief mention was made of the scope for improvements in the electronic payments infrastructure, no pieces of legislation were proposed to address current shortcomings. This remains one of the relatively cheap and easy initiatives that can be undertaken with potentially significant returns, particularly in the area of increasing service exports. Given the potential of a properly developed electronic payments mechanism, it is rather strange that more attention has not been given to it despite repeated calls from organizations like the TTCSI. Hopefully this would be more comprehensively addressed during the debate.

Other initiatives like the entrepreneurial talent grant and the establishment of a committee to facilitate regulatory approvals for investments above $200 million are laudable based on their intentions. However, such programs have been bastions of corruption in the past and proper measures must be put in place to ensure transparency and efficiency.

While the budget correctly focuses on rationalizing government expenditure, increasing revenue, stimulating economic activity and implementing suitable safety nets to reduce the burden of adjustment; the real struggle lies in execution. Overly optimistic projections may result in lower than expected revenue thereby jeopardizing the implementation of many of the government’s plans for fiscal 2017. Additionally, there is also the challenge of establishing systems aimed at improving efficiency in a way that is itself efficient and not susceptible to the corruption and wastage that it is meant to address.

Precious little detail was given in the Budget presentation. We look forward to the debate where details pertaining to implementation should be more forthcoming. We reiterate our commitment to work with the government particularly as it relates to the development of service exports and wish the government well in the execution of its plans for 2017.