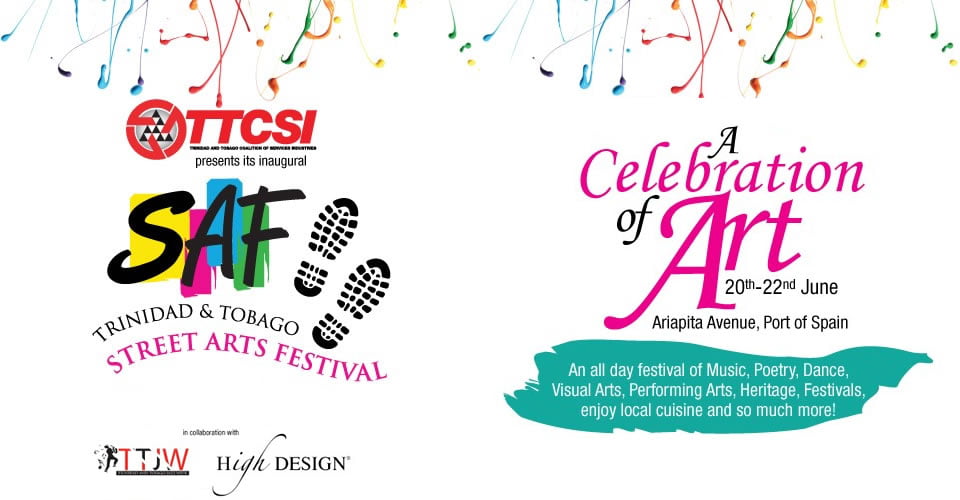 The event brought together several stakeholders, industry leaders and artists from the Creative Sector. The creative industry is the largest bloc of TTCSI’s membership.

As such TTCSI decided to create a platform for the Arts for both experienced and emerging artists to showcase their talent. It is expected that the SAF will attract approximately 2500 people.

TTCSI’s CEO Nirad Tewarie in his brief remarks further outlined the benefits of hosting such an event.

“We believe there are many benefits to be derived in hosting our First SAF. SAFs have proven to be a worldwide success for the development of the creative industries and artists. It is design to include the local community, improve the quality of the sector, and to engage investors within both the public and private sectors. It can facilitate cross marketing amongst cultural providers, and instill a greater sense of pride and identity in our communities.”

But Tewarie said there is much more social value to be derived from SAF.

Given the recent spate of violence among the youth in T&T, he said, SAF could provide another positive outlet, in which young people can get involved and be engaged.

“Many studies have shown when students look at positive imagery before taking a test, they do better in the test. It’s just about changing the psyche, we don’t expect that the festival is the be all and end all, but we certainly think they it can contribute meaningfully.”

Also highlighting the value the SAF can bring to the national economy, Tewarie said, according to the British Arts, in 2004, the Brighton Festival generated £22m within the city’s economy for every £1 spent on tickets and thereby accounted for over £20m, within the local economy alone.

This exciting event, which is carded to take place from June 20th -22nd and which will be nestled between French and Carlos Streets along Ariapita Avenue was endorsed by local and international organizations and key individuals including Daniella Tramacere, Head of the European Union Delegation, Calypso Monarch 2014, Roderick “Chucky” Gordon and Lenore Joseph, Port-of-Spain City Corporation. The Port-of-Span City Corporation is partnering with TTCSI to host the SAF, as they too will be celebrating the city of Port-of-Spain’s 100 year Anniversary.

The SAF is envisaged to be an international annual event for the Arts, including visual and performing arts, fashion, film, festivals, music, and heritage. It is also design to be a hub for creative energy, as well as a family event where kids would have their own space.

However, Tewarie made it clear that the SAF is not another Carnival and there would be no hosting of big fetes. While there may be small fringe events at night, the major activities would be held during the day.

He pointed out that TTCSI was still in the planning stages of the event and is currently meeting with stakeholders in an attempt to create maximum benefit and minimum inconvenience.